1. I have a job.
I thought I’d lead with that, since getting a job is always pretty great news, particularly when one has been unemployed for one or two more months than was intended. The job is a research position in Glasgow in a really cool group doing really awesome stuff, working with some very interesting (and impressive) people. You know what they say about aiming to never be the smartest person in the room? I like to take that to extremes.
2. I’m not moving to Glasgow which is great for my knitting.
Luckily commuting by train from Edinburgh is practical and will carve out some knitting time in my day. I can’t read on trains, but I can knit, at least if it’s not crazy charted lace, since I don’t have to look at my needles. The train is about 45 minutes, so that’s 90 whole minutes of knitting bliss and audiobooks every day.
3. My office will be reasonably close to the HUGE John Lewis over there.
And a subway ride from the Yarn Cake. Neither of these facts are pro-stashbusting. Particularly combined with an increased income.
4. Speaking of, I’m afraid to look at my stash busting this month.
I may have bought some celebration yarn. I may have been given yarn. I haven’t cast that many projects off. None of these things are going to reduce my stash. 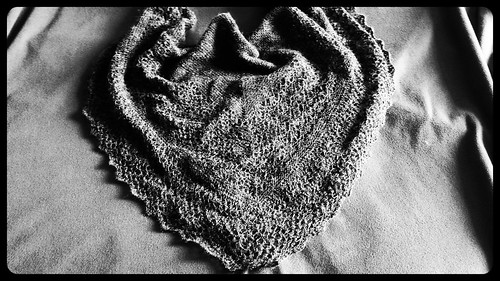 5. I did finally block My Heaven.
And it’s soooooo pretty! The pattern was so much fun, and the yarn is great. It’s not too scratchy to wear (for me anyway), but that that lovely crunch to it. I’m now trying to figure out how to get people in Nordic countries to find and send me some. (Apologies for the potato shots today, just discovered my camera battery has died, so phone it is.) 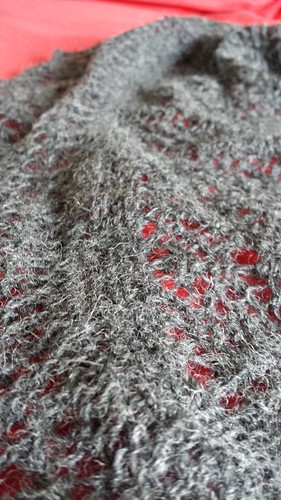 6. I also finished my prototype gloves.
One pair is down, the pattern is written, the swatch is almost swatched and it’s almost time to put it to the test knitters! It’s not a terribly complex design, but I’m somewhat proud of it. It’s also really hard to take a good pic of a glove on a camera phone without a tripod. 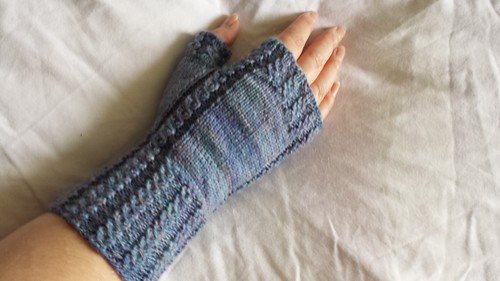 7. It’s almost April.
Yes, Suzanne, well done, you can read a calendar. But April was the month I’d set aside for working on the Master Hand Knitter Level 1, so that’s pretty exciting. And now with my new job start date looming in May, I have extra incentive to get going on that.
8. There’s no point to this post, really.
Just wanted to share.

Post number 101 reminded me of Room 101, a tv programme my brother and I used to watch. It’s named after a torture chamber in Orwell’s novel ’1984′ where victims faced their own worst nightmares. Guests on the show attempted to persuade the host to send their pet peeves into Room 101. Having talked about a few of my pet peeves on twitter during the week I thought I would share my fibre craft hates.

1) Sewing.
I quite like sewing by itself, sewing with a machine or handsewing or even cross stitching. But sewing seams, sewing in sleeves or *shudder* sewing on buttons are a different story. Anything more complicated than mattress stitch and I end up pulling my hair out. I used to hate sewing in ends too but I have demoted that task to just irritating now.

2) Running out of Yarn.
Especially running out of yarn during the bind off. We’ve all been there, need I say more?

3) Ripping.
I don’t know why but I really struggle to rip out my knitting. It feels sacrosanct. I will go to any lengths of tinking, adjusting and re-designing to avoid it. Usually I later wish I had ripped it out and re-done it. On occasion I have managed it. Very rarely have I ripped out the same piece more than once, or twice – Talamh cardigan I’m looking at you. I’m very proud of my aerial unwind medal from the Ravellenic Games.

4) Knots.
Knots in yarn drive me nuts. I don’t mind the odd one but sometimes I’m knitting a cardigan or something and it seems like every single ball has at least one knot in it. Or one ball has several knots in it! The worst is when the knot is only a few metres from the start or end of the ball. The worst culprits for this I’ve come across so far are D.Bliss / L.Harding yarns.

5) Magic Loop.
When I want to knit I want to *be knitting* not spending all my time fiddling about with needles and moving stitches about the place. I’ll admit it’s very handy for making two sleeves that are actually the same length. And for avoiding second sock syndrome by knitting socks two at a time. And also when trying to use all of a ball of yarn on a sleeve/sock. But I just don’t like it. I’m looking forward to getting my hands on a pair of the new magic sock needles by Addi. They’re tiny circular needles that allow you to knit small things in the round without all the messing about. I can’t wait to try some tricky patterned socks with some.
On the subject of socks, I’m doing well with my sock-a-month campaign. The Jan/Feb socks were two-at-a-time (TAAT) socks using magic loop (!!!) for my husband’s birthday. They were a day or two late but he really likes them. The March/April socks were to be a present for a friend but the first one turned out huge so himself scores a free pair of socks! It’s the least he deserves for putting up with me for ten years (exactly today!) I’m ready to graft the toe of the first sock now. The pattern is Kwalla, the first pattern I’ve knitted from the Socktopus book he got me for Christmas. Two of the pairs of socks I have queued for later in the year are from this book too.

In other knit-knews I’ve been testing a new lace cowl design which I hope to post soon. My Oisin hat is being test knit by the pattern testers on ravelry and seems to be going well. I hope to release an updated version in April. I also have two test-knits to do for friends. Add on a cowl for Mother’s Day and a baby dress – busy times!

So now to you, what concepts, things or people (craft related or not) would you send into Room 101?

Somehow, over the last year and a half, we’ve manage to clock up a whopping 100 posts! Crikey! And a lot has happened over that time. We’ve Ravellenic Gamesed, knit, spun, traveled, cast on, cast off, frogged, fixed mistakes, missed mistakes, finished languishing WIPS and created new ones to replace them.

My own first post was about my scandalous list of WIPS, and a fair few of them have been completed by now. Some others got frogged. Some others… well, lets not talk about those right now…

Over the past few weeks I’ve been thinking a lot about designing and pattern writing. I’ve been helping a friend out with her designs, and have been working on my own first “proper” design. I’ve knit things without a pattern before, and I’ve written out the instructions for the Minifig Baby Hat here, but this is going to be a different kettle of fish. I’m designing a pair of fingerless gloves with Smudge Sock Yarn.

The easy part was knitting the first glove. I’ve knit gloves and mittens before, so I had an idea of how to put it together and how I wanted the design to go, and I was quite pleased with the result.

The tricky part, of course, was using my notes from the first glove to figure out what I had done, so I could write out the second glove to match. Was that 4 rows before the ribbing, or 3? I’ve been driving myself cross-eyed trying to figure it out.

I think I have it pinned down, and after a little brain-break I’ve started on the left glove, following line by line. The next step is to recruit an alpha-tester or two to try it out and spot all the things I’ve missed. In the meantime, perhaps I should start revisiting my WIPs once more.

February absolutely flew by. Partly it’s just a very short month, but it’s also been quite action packed. I started with a visitor for the Ravellenic Games cast on, then it was straight into Valentines and then our very first wedding anniversary. Technically that last one falls in March, but all the prep was done in February. And yes, I did manage to finish a jumper during the games. In fact, I had all the ends woven in within 10 days, which I’m quite pleased about. Somewhere in between I managed to do two comedy performances for Bright Club. I’m a bit of an oddity when it comes to being on stage. I get terribly anxious and awkward in social situations and with new people, but I experience almost no stage fright, something so universal I feel like I’m broken for not having it.

The upside, aside from the obvious, is that I can knit before and after performing without doing scary things to my gauge. Now one of my favourite places to knit is backstage in the comedy club, curled up on one of the comfy chairs, chatting with people who are both smarty and witty and trying to pretend I’m one of them. It’s even sparked conversations on crochet and maths which we all know is step 1 in any conversation.

Usually I bring socks to Bright Club for some mindless knitting, but this time I was able to work on the garter stitch section of a lace shawl. My Heaven was one of those projects I picked up, cast on, knit a few repeats and then it went wherever WIPs go when I’m not looking. Once my Ravellenic Games jumper was off the needles, I needed something to work on for a week or so, and out came My Heaven, and my goodness, I fell completely in love with it, even if I haven’t managed to take a photo yet.

All in all, February was a good month for knitting. I managed to finish a Winter Thaw (left), my games jumper, and cast off My Heaven, even if I haven’t managed to block it yet. In total, I knit more than 2km of yarn, and didn’t quite refill my stash, despite my worst efforts.