Hey fibre folks, sorry for my recent absence, I was looking after my grandad who sadly passed away. When I got back from Donegal I beeswaxed and buffed the pieces for the guild spinning wheel before putting it together. I’m spinning some pink merino on it to make sure it’s running smoothly and to try get the kinks out of the brake band. The take-up is still a bit hit and miss, I think it needs to be worn in. Have you had that problem with an Ashford wheel before? Hopefully it will be ready for its first rental soon! There’s also a drum carder and the loom I posted about before. I’m looking forward to the Guild East Meet this Sunday. I wonder if any of the spinners are interested in forming a team for the Tour de Fleece.

Naturally I haven’t had much crafting time lately, though I did knit a pair of socks at my grandad’s bedside. I also finished the quilt I was working on, thanks to a lend of a sewing machine from the lovely Úna. I whipped up a little canvas boxbag as a birthday present for my sister-in-law as well. Next up is a set of Carcasonne themed cushions, thanks to some spoonflower fabric with meeple on it.

Knit-wise I’ve been trying to pick up some more lace now that summer is here. That and the fact that most of my stash is laceweight. One of my goals for 2014 is it knit more lace and so I picked up my longstanding lace WIP – the seascape shawl. Just as I was getting into it again (it has a very long pattern repeat – over 40 rows!) my needle broke! Thankfully I got word today that the replacement tip has arrived. In the meantime I’ve been working on another lace shawl in some grey Lang merino. It comes in small balls (25g) which means there’ll be several ugly joins. And it’s quite softly-plied which can be tricky, but the colour is beautiful and I’m really enjoying the pattern. I’ve even been inspired by Stew to add some beads to the edging. Did you see her beautiful beaded shawl in the last post – wow!

I’ve just finished my first beady lace project! Woohoo! I’ve knit a couple of things before that had bead options, but I figured it was time to finally take the plunge when I saw the Iznik KAL was starting just after the Rav Games. If you tilt your head and squint, you can imagine that the KAL wasn’t released back in March and all the clues were released within a few weeks. More K, less AL. 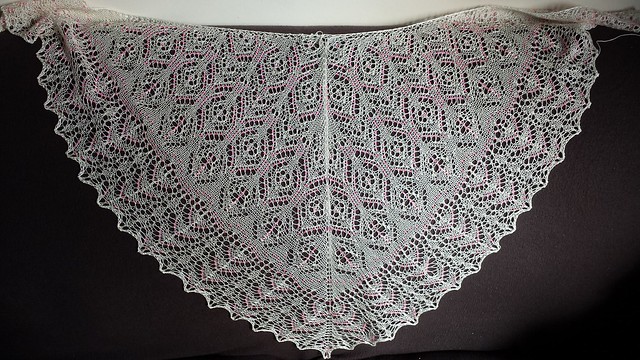 From a distance it’s somewhat sedate looking. I used some of the undyed silk yarn from my wedding shawl for it, which is always a pleasure to work with.

Then you get closer and see the beads! 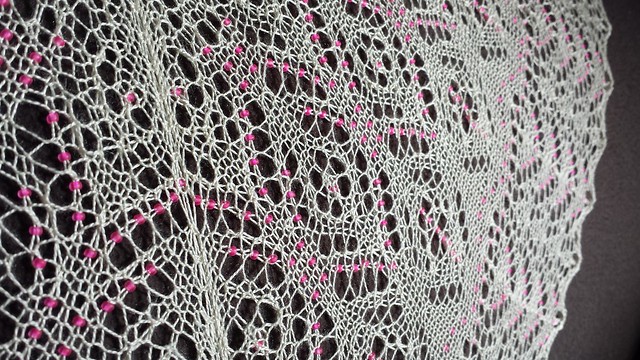 Yes, hot pink! When I saw them online I couldn’t resist. I almost wish I had used black yarn instead of white, although black lace is tricky enough without adding more complications.

Overall, I was quite happy with my first trip to beadland. The beads were great, I only found a couple of duds while knitting, and more than that probably ended up on the floor. I used the crochet hook method which seemed handy, or as handy as it could be while juggling two needles, a tiny hook, teeny beads and a fibre that is well known for it’s slipperiness.

The thing that really saved the day for me, though, was my magnetic chart keeper. I printed out the charts because they were too big for my laptop which is what I usually use. Then I discovered that my crochet hook would actually stick to the magnets too, so I was able to fill it with beads, stick it above my chart and it was secure and safe until I needed it. 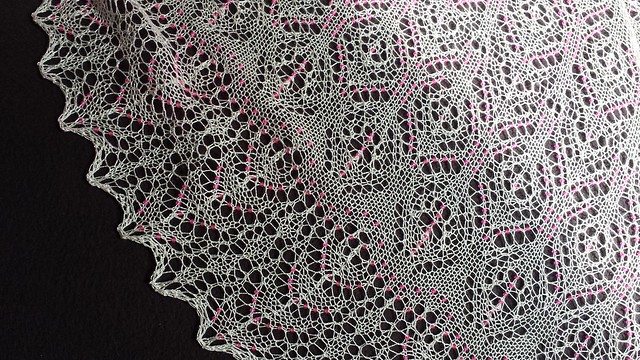