A Raveller asked recently to buy some yarn from my stash, leftovers from my first jumper in fact, to help her finish a project. I was delighted – it fit the  stashdown plan and I’d already made a jumper, hat and gloves from the yarn. The only problem was how to arrange payment for the yarn and postage to America. In the end she sent me two patterns (of my choice) as gifts on Ravelry. It was perfect – exchanging yarn I won’t use for patterns to knit the yarn I have!

One of the patterns is Grain of Salt, a triangular lace shawl that was love at first sight. The geometric lace called out to me and I cast it on as soon as I received the pattern. It’s not exactly straight forward knitting at first but I soon got to know the flow of the lace. The yarn is Lang merino lace which is made of 4 very loose plies and comes in 25g balls so it’s not particularly suited to lace shawls. Which is strange for a lace yarn! Apart from that(!) I quite like the natural grey blend and soft handle of the yarn. Since Stew has been knitting with beads I decided to hop on the bead-wagon too by adding beads to the border. I really enjoyed knitting this shawl and I love how it turned out.

I decided against an extra repeat of the lace section, despite having plenty of yarn, because I didn’t want a huge lace shawl. I’m very happy with that decision – the final post-blocking size is ideal for me. Sticking with the large size meant I had most of a ball of yarn left over. What better to do with that ball than another test knit for Yvonne of Dublin Dye Company. A wonderful pattern for lace fingerless mitts that I adore. Here’s the first one before I added the thumb. The photo doesn’t do justice to how pretty and fine and elegant these mitts are. These are going to Doogarry (twitter handle) to help her fund-raise for Autism Service Dogs. 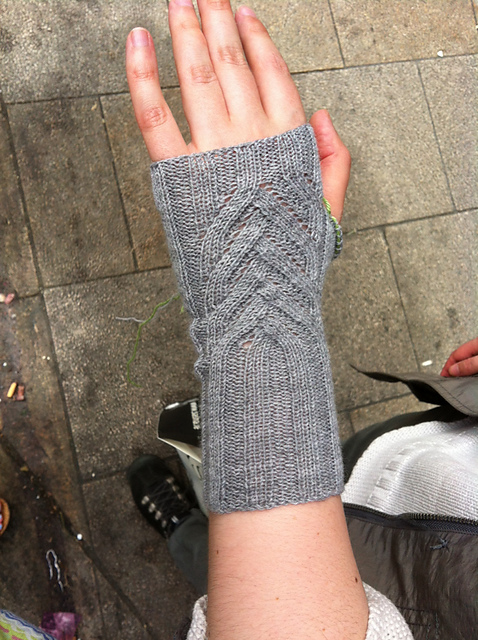 My last train project, which took me through the first two months of my job, consisted almost entirely of day after day of stockinette. It was perfect. Before, or after, a long day of remembering new names and figuring out new physics, all I had to do was knit, knit, knit while listening to my audiobook (The Mad Ship, by Robin Hobb).

Of course even long stockinette shawls must come to an end, and when it did, I found myself without any similarly un-taxing knitting for my commute. I don’t fancy the idea of DPNs on a train, for obvious reasons, which rules out socks and gloves unless I go magic looping. And after a nasty bout of startitis I had more than one new lace shawl on the needles, none of which really scream packed commuter train friendly. Particularly with the Commonwealth Games about to descend on one end of my commute, and all the August festivals of Edinburgh on the other.

So naturally I’ve settled on this…

It’s almost simple stockinette, right? The pattern is Ringwraith, from the same designer of the Evenstar shawl, and the yarn is pure silk from colourmart in a lovely deep green. There’s almost no give and lots of splitting in the silk, but it actually knits up a dream as long as you’re careful. I really like the crispness it’s giving this pattern, not a soft, fluffy minion of Sauron.

At first I followed the pattern line for line on my laptop. Then I used my phone to keep me on track. But the lovely thing about so much lace knitting is that once you know the repeat, you can usually just follow the next logical step as the rows go by. Now I don’t need to look at the pattern at all.

Of course, if I had been paying more attention, either to the pattern or just to the knitting in front of me, I may have caught this particular snafu. But I’m calling it character and knitting on.

A week or two ago Yvonne of the Dublin Dye Company posted on twitter/ravelry looking for test knitters of her new sock pattern. The exact socks that I had been admiring as she knit them at the Guild AGM. I leapt at the opportunity and managed to nab a space on the test knit list. The pattern is so addictive the first sock flew off the needles in just a day! I couldn’t sleep until it was done. 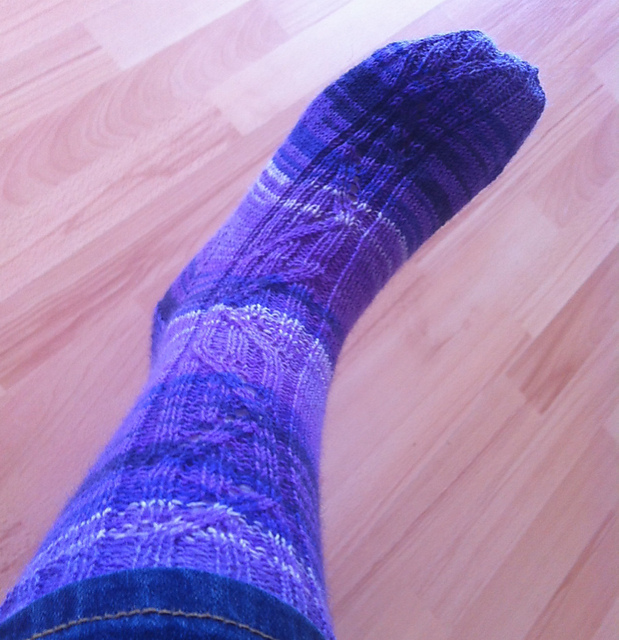 Unfortunately life got in the way shortly after casting on the second sock. I injured my shoulder so badly I couldn’t even lift the kettle, or the milk carton, or take a cup down from the press without pain. So definitely no knitting. Well, except a bit of ribbon knitting for my gran’s birthday present, which doesn’t count as knitting (and didn’t hurt.) My Gran was delighted with it as it’s the same cream and rose as her outfit for a wedding. If you’re interested in how it works check out the tutorial by Anne and Pauls. (Photo from Loviesyarn)

With no more setbacks the second sock joined the first. I can’t wait til the pattern is released and you can all knit them too! This is my 4th pair of socks this year, so I’m well ahead of my sock-a-month plan now. I even came across a group on Ravelry with the same idea – 12 socks in 2014 (although they mean 12 *pairs* of socks.) They run monthly challenges and have inspired me to keep going with my plan – and even aim for a pair of socks per month, next year

Through the group I came across a tutorial for making a sock blocker from a hanger. So I made one with the only coated metal hanger I had. It turned out a bit small, perhaps American hangers are bigger. 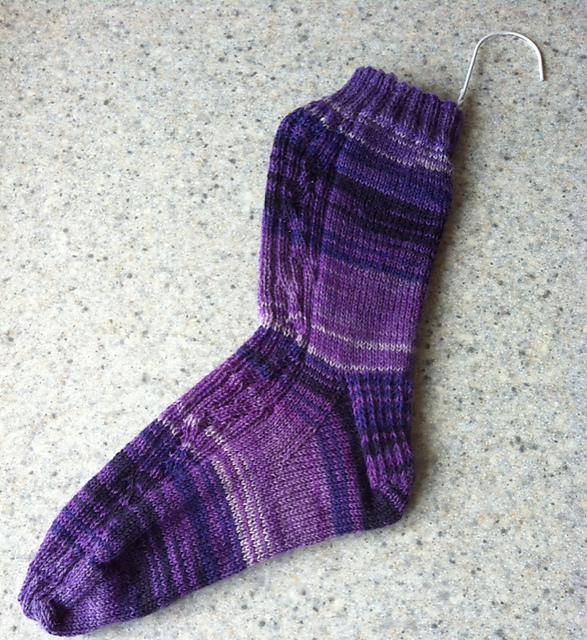 As soon as the socks were finished I was straight into another test-knit for Yvonne. A wonderful pattern for lace fingerless mitts that I adore. I’m knitting them with the leftovers from my Grain of Salt shawl. Next post will be about the mitts and shawl!

Speaking of test-knits, I’m looking for people to test knit my Milford Cowl pattern. If you’ve met me in real life it’s probably the cowl I was wearing, made from Hedgehog Fibre cashmere. If you’re interested in test knitting let me know, or head on over to the thread on Ravelry and join the fun.