What’s new with me this week?

Well, I added my second pattern Milford Cowl to Ravelry. You can see the page for it here, on the top bar. Also my Oisín Hat pattern became suddenly popular last Thursday, no idea why, and this little blog was inundated with lovely new visitors. Over 10% of our reads-to-date ever came from that one day – mind boggling. I also have a new nephew Lorcan, Oisín’s baby brother, who of course deserves a pattern too. I’m planning a vest to match the Oisín hat, but I probably won’t get around to it for a few weeks because I don’t have the right size needles and….

I’ve started a new job! I began teaching at a new university this week, thankfully one closer to home than before. So far so good, except for the lack of knitting time because of all the preparation time. And no commute knitting because I have to drive there (20mins drive versus at least 90min on two buses is a no brainer.) Hopefully once things settle down I can get a little baby knitting done, and maybe a little pattern-planning too.

I did manage to complete my Seascape shawl at last. I started it 3 years ago in 2011, restarted it a few times, and only finished it thanks to September Finishing School with the Stashdown Ireland group. I still haven’t blocked it – that’s going to take a bit of work because the dye hasn’t been properly fixed on the yarn. Every time I knit it my fingers turned blue. There’s also an inadvertent ombre-effect going on – it took me so long to knit that the start is a much lighter colour than the recently finished end. Oops! Although it’ll probably all even out when the dyes run off when I wash it.

I’m really looking forward to Handmaid Craft Day this Saturday 27th September. It’s on in Damer Hall on Stephen’s Green from 10.30am to 4.30pm; it costs just €5 entry & under 12s are free. All proceeds go to the Laura Lynn hospice for children and young adults. If you’re in Dublin it’s worth a visit. I had hoped to take a class but with the new job I couldn’t guarantee I’d make it. I had also planned to finish my Talamh cardigan in time to wear it, but with a sleeve and half still to go that’s unlikely now. It’s a pity because I wanted to have it finished within a year of casting it on, my last birthday. Still there’ll be cake at Handmaid to celebrate the end of my twenties and lots of lovely people to see. And lots of craft supplies and pretty yarn to maybe bring home.

So I’ve a new pattern, new nephew, new job, new FO and a new decade ahead of me, what’s new with you?

You may have heard of a little election Scotland is having tomorrow. It’s certainly come up in conversation once or twice. And by once or twice I mean that it was the topic of conversation for pretty much every dinner conversation I had over the two weeks I was at the workshop in Spain. Even the bus driver on the way to the airport chimed in.

At the moment the outcome is far too close to call with any certainty, so tomorrow I and all the other Scottish voters will take to the polls and cast our votes either way. It’s an intimidating decision and while I have a fairly good idea which side I will come down on, I’ll be keeping my eye on the last hours of the campaign.

Of course, all that election coverage will require some electoral knitting. Luckily I have a Shetland shawl from Heirloom Knitting that would fit with the theme. Or perhaps it will be a good time to cast on a Shetland style shawl with some lovely grey Shetland lace.

In other news, I did manage to finish casting off my Undercover blanket. 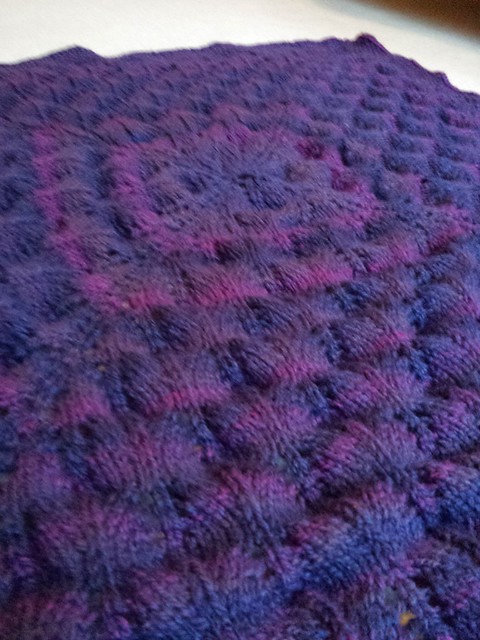 The icord edging was a breeze once I got home to that final ball of yarn. For the corners I decided to bind off twice into the corner stitch and into one stitch either side. To do that, I knit two, then did a ssk as usual, but only slipped the stitch from the icord off the left needle. Then I slipped the stitches back, knit two and then did a ssk into the last stitch of the ichord and into the same blanket stitch as the previous row.

I still have to graft the start and end of the bind off together, weave in an end or 8 and then block the blanket, but first I want to knit a large swatch and throw it into the washing machine to see how it fares.

Hello! It’s nice to be back after the summer break. Since last time I’ve knit a shawl, a blanket and two pairs of socks. The shawl was Lintilla, a garter stitch shawl with a ruffle, for a friend who turned 60 shortly after a very serious operation. She knits lots of baby things for other people so I wanted her to have something really nice for herself. It was knit with yarn that was a present from a friend, jitterbug in cinnamon colourway. Despite using a larger needle than recommended it still came out at shawlette size because I wanted to make it from the one skein. Otherwise I was quite happy with how it turned out, though I would use a smaller needle if doing again as the looseness took away from the ruffle effect. Unfortunately I didn’t get a picture of it before giving it away. I bought the whole set of similar patterns and I’m looking forward to trying hitchhiker soon.

The blanket was of course Undercover again, as a mini KAL (knit-a-long) with Stew. I am very excited to see how the finished blanket looks in Marble DK, see last week’s post for her progress picture. Mine was knit with yarn I won on the 12 shawls in 2012 group on ravelry. It was designed to knit the pattern that came with it, the Secret Garden Shawl, but I ended up ripping it out as the pattern wasn’t ‘nice enough’ for the beautiful yarn. Eventually it still needed to be knit though. It’s gradient dyed to change from a bright blue to dark blue, then to dark purple and on to a bright purple. The 6 skeins formed an even progression so it would have been best to knit them with a constant-width pattern such as a long stole (or a tunic top as I once planned) for a smooth gradient. When knit from centre-out in a circle or square the transition occurs mostly on the edge of the item, quite sharply, because the number of stitches increases dramatically as you knit. I held the yarn double as it’s fingering weight, simply changing balls alternately for a smooth change without needing to alternate for a few rows. I did run short of yarn by a few grams on the i-cord bind-off but luckily I had an end of botany lace that was fine when held double with the main yarn. 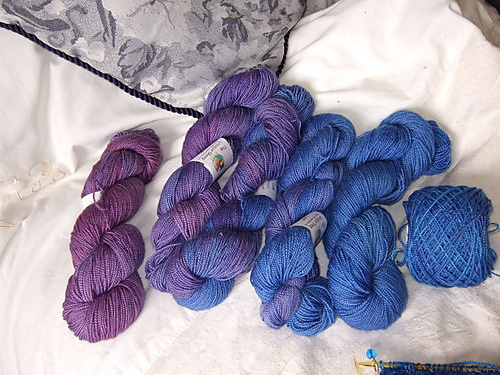 I also took some pictures of the i-cord bind-off to add to the blogpost from the previous blanket where I described how to do it. This time I didn’t go up a needle size for the bind off, though I wish I’d used a larger needle for the whole project for a bit more drape. I made the corners a little rounder, by doing only one row of plain i-cord either side of the corner stitch instead of two, as I don’t plan on blocking it strongly. In fact I haven’t blocked it at all yet! It turned out so nice that Greg declared he was keeping it 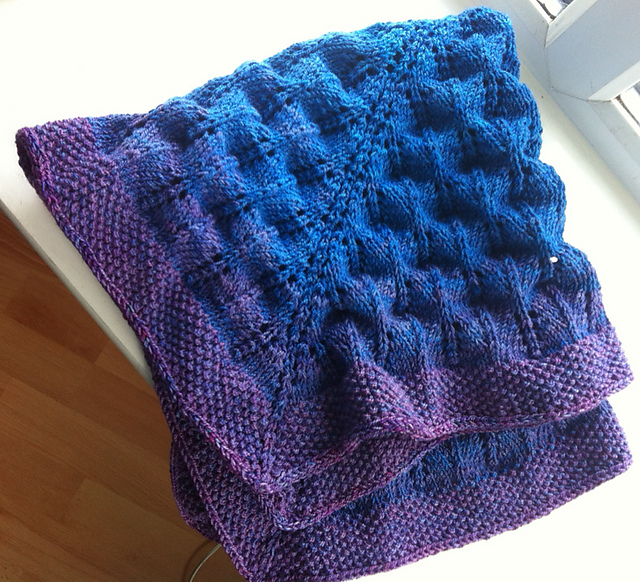 Summer is officially over, but thanks to a work trip to Spain, I’ve managed to forestall the fall in temperatures. I’m in a small town north of Barcelona with two supermarkets, a conference centre and not. one. single. yarn. shop.

That’s probably for the best though, since I’m hear to do physics, not knit. Plus, I brought some knitting from home, so it’s not like I’m sans needles for the entire time.

My current project is a rare one for me, a baby based knit. Two of our lovely friends will become parents before the end of the year, and I had enough notice to start a blanket. 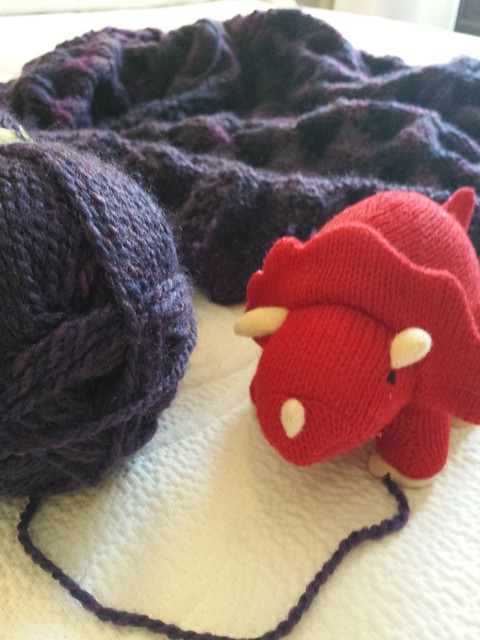 The pattern is our good friend Undercover and the yarn is James C Brett Marble DK in a nice purple mix. I’m not a fan of traditional pastel colours for babies, and I thought the parents wouldn’t object to a non-traditional colour. Added bonus, more fun for me to knit!

I’m hoping to have it finished by the time I fly home, although having only brought one ball of yarn, I may have to wait to get back.