You know that feeling when you’re not sure the yarn is going to last until the end of the project, and you start to knit faster and faster as if yarn is a function of time rather than a function of distance? I’ve been playing that game with Mahy recently. Luckily I finished it just in time, or space, with a tiny bit left over, so I don’t have to send my sister on a yarn hunt before she comes to visit at half term. 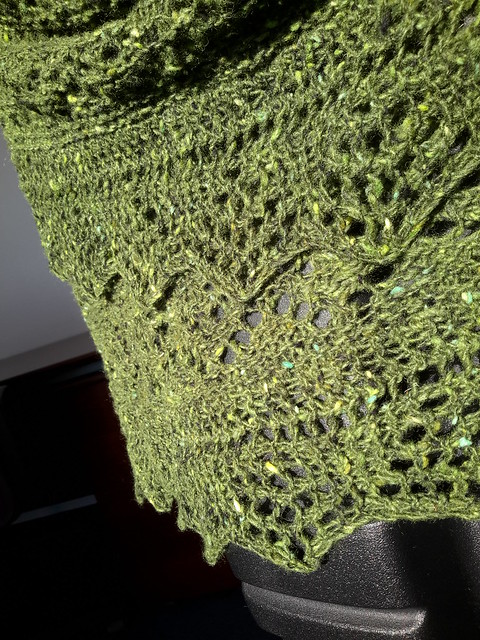 I cast Mahy on during the Fibre Friends retreat, aka that long weekend I spent sleeping in Cathy’s spare room. During the weekend, I was able to finish the garter triangle, which made it quite handy for transport. For the central triangle you work up from a single stitch, starting every row with a yarn over for picking up later. Once that’s finished, you just bind off the top of the triangle leaving one stitch live for the border. Since I don’t usually travel with my full supply of needles, and I have the will power of a five year old, I had borrowed needles for the cast on, but since only one stitch was live in the end, I was able to secure it with just a paperclip. Cathy, I owe you one paperclip. Overall, Mahy was a very pleasant knit. It has a garter stitch base so every other row is a rest row, and the lace is not boring, but not too complicated for tv knitting. It would have made excellent train knitting if it wasn’t so huge. And man, this thing is huge! 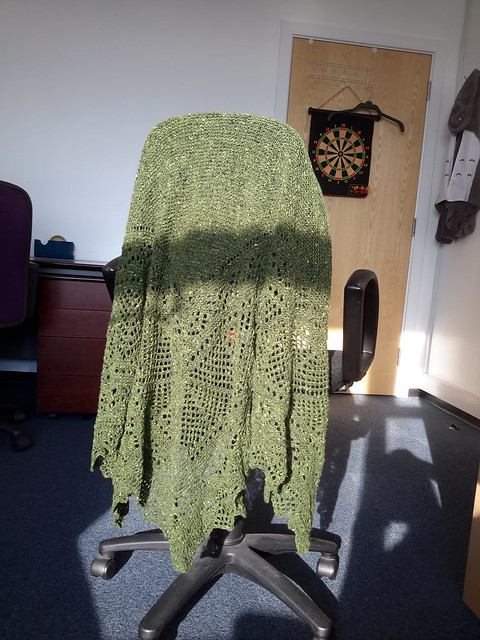 I didn’t block it firmly, just enough to stretch it out and show the lace, so it has a fluffy, slightly crisp texture. In fact, I’m already considering adapting it for a small blanket. In a soft yarn it would probably make a lovely baby blanket or a snug lap blanket. So now Mahy has been conquered, it’s back to my two deadline projects. First, the Happy Out KAL, which so far consists of 95% of a pair of gloves, but not 100% of a single glove. Once I finish the thumbs I’ll cast of a test knit for a matching hat. I have a feeling that will be another race against space time but we shall see. And finally there’s my Knitmas project. I’m really enjoying both the yarn and the pattern, and that’s all you’ll get to know about that for a little while. 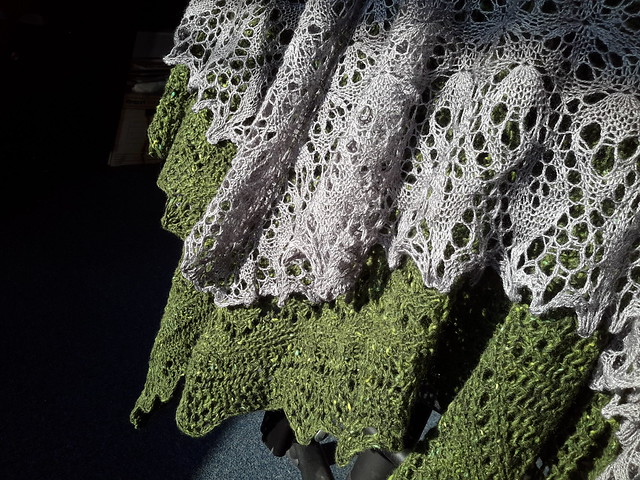 PS I wrote all this out a couple of days ago, but kept missing the lovely daylight for photos. In the meantime, I managed to block my Laminaria, so two shawls for the post of one. 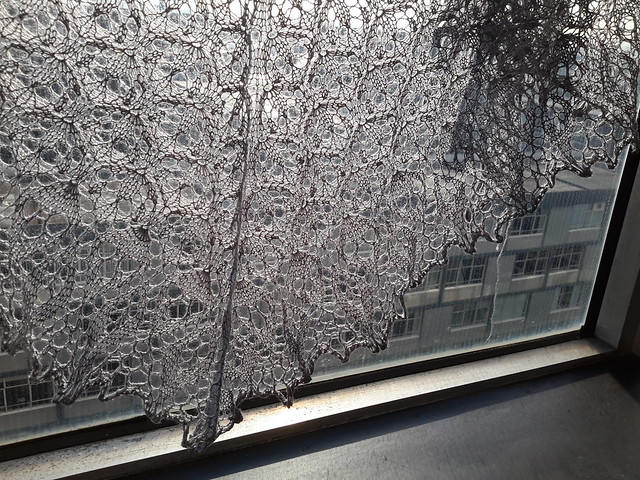 One thought on “Very easy being green”