This month I had the great privilege of captaining the Stashdown Ireland Team for the Ravellenic Games. The Games take place alongside the Olympics, where ravelry members are encouraged to take on and complete a challenging craft (or several!) while watching the Olympics. This year the global cast-on took place when  the opening ceremonies started the for the Winter Olympics in Sochi, Russia. I was delighted to have something to throw myself into for the two weeks and organised to visit two of our non-resident members: our own Stew for the opening and Stripycat for the closing. It really felt like more like a cross-border event that way. I really enjoyed knitting my little heart out although ultimately I only got one project completed and one project frogged. I also had fun making the team logos, including a customisable one for team members’ Ravatars. The team tag, #teamsdie2014, was chosen to be short and memorable because I have had problems misspelling long fiddly tags in the past, it’s short for StashDown IrEland.

I found it very difficult to decide what projects to do for the games. I really wanted to knit a cardigan or jumper, from some Drops Nepal that had been hanging out in my stash. I had searched several times for the right pattern and kept changing my mind. The yarn is too scratchy to be next to my skin so some of my favourite patterns had to be ruled out. Also it’s quite a strong yarn without too much stretch and that eliminated yet more candidates. Eventually I decided on the Acer cardigan. This would be a real challenge for me, combining cables and lace and, horror of horrors, sewn in sleeves. Sewing is something I try to avoid and the thought of sewing in sleeves had me in a cold sweat. It would be a perfect choice to try and stretch myself with the Ravellenic games – as if knitting a cardigan within the timeframe wasn’t enough of a challenge! Ever the optimist I planned to finish off a cardigan WIP as well a shawl if I had time.

I started easy by frogging a sock for the aerial unwind event. The yarn had been tried in several patterns, supposedly for a Christmas present for Stew, and 6 months later I couldn’t stand to look at it. So Stew got it as a knit-it-yourself present

I cast on Acer and flew through the main body. A little too fast as I kept missing cable turns and having to unpick the lace to redo it. The ice skating was simply too beautiful and distracting! When I got home life got in the way a bit and I hadn’t the concentration for the armhole and neck decreases and short rows through the lace. Thankfully there were two plain enough sleeves to keep me going. A three needles bind off on the shoulders followed by several attempts to pick up the buttonbands and collar and eventually all the knitting was done! Hooray! The first attempt at sewing up the sleeves is a little puckered at the top so I plan to redo it. I entered it for the Lace Luge, Sweaterboard Cross, Cable Curling and Stash Skeleton events. I can’t wait to block and wear it! 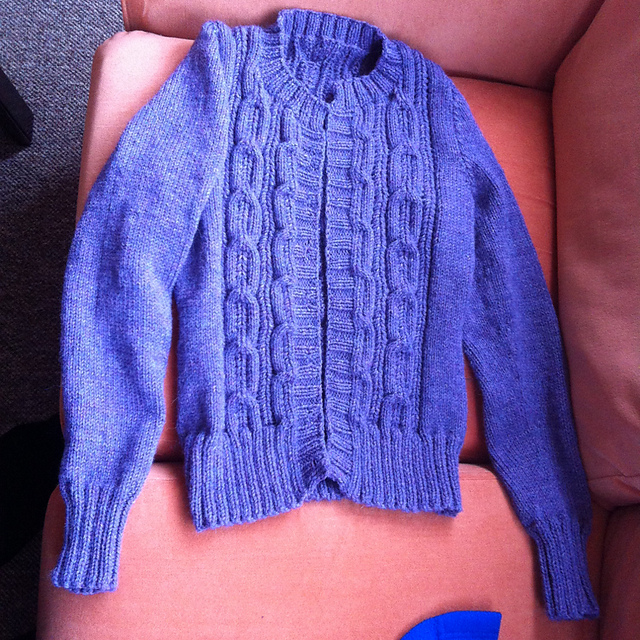 My other main Ravellenic project was to finish my Talamh cardigan. This was tight to the line. With two days to go I still had two sleeves to finish. I managed to knit the first sleeve in one day, with some crazy knitting and a lot of patience from Stripycat. That night I realised there wouldn’t be enough yarn for a second sleeve and that the first sleeve was too big. So the last day saw me ripping out the sleeve and reknitting it with faster decreases, hoping that this new smaller sleeve would take less yarn and let me knit a second one. No such luck, it was still too big and still using too much yarn. So ended my Ravellenic Wip-dancing event, ripping the sleeve again the morning after the closing ceremonies. Thanks to some very generous Yarn Tasters on twitter and some good advice I hope to be able to make two sleeves in the next week. Or at least attempt it one last time.

I was nervous and excited to be captaining a team this Ravellenic Games and I really enjoyed reading about how everyone was getting on. It was also great fun really trying to knit a challenge and watching all the really cool winter sports. It’s hard to believe it’s all over and there’s nothing left to do barr wait to be called to the podium. I’m looking forward to next time already